Electoral forecasting has been quite heavily investigated in the Western countries (especially USA, Great Britain and France). However, models that strive to forecast the election results in new democracies are quite rare. This article aims to present first forecasting model for the elections to Lithuania‘s parliament, Seimas. Since sample of available democratic elections is too small for the statistical modeling, treating the votes of separate government parties as a dependent variable is suggested: assumption is made that it is possible to forecast the votes of different parties at the same elections, while using one model. Though party system fragmentation is usually treated as a negative factor for the electoral forecasting, in case of Lithuania it enables building of a statistical model with at least 9 cases (sample used in the article). Another important assumption of the model is that performance of parties in the parliamentary elections is linked to their performance in the preceding local elections.

Resting on these assumptions, model that strives to predict the shares of votes of separate government parties (parties that spend major part of the term between elections being in the national government) is constructed. Using just one independent variable (share of votes at the municipal elections), model explains 0.913 percent of variance in the dependent variable (adjusted R-squared) and has a Standard Error of Estimate (SEE) equal to 1.782. These characteristics show quite satisfactory accuracy of the model; it also satisfies all three requirements for forecasting functions (parsimony, reproducibility, lead) quite well. Ways to improve the suggested model are discussed: one of the possible improvements is inclusion of dummy variables measuring political circumstances that could affect the votes of the parties. When two dummy variables (negative and positive political circumstances/events) are added to the model, R-squared and SEE improve significantly: however, such model is vulnerable to criticism because of the subjectivity and poor lead. Resting on both models, forecasts of the votes (percent) for the three government parties in the forthcoming 2012 elections to Seimas are made. 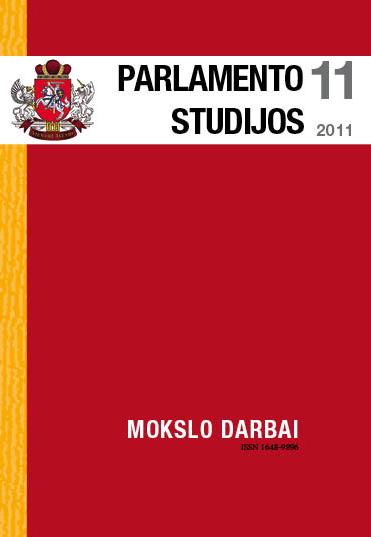